Beyond: Two Souls Wiki
Register
Don't have an account?
Sign In
Advertisement
in: Characters, Protagonists, Entities,
and 2 more

Edit
watch 01:36
We're Getting Mutants in the MCU - The Loop
Do you like this video?
Play Sound

"He's like a lion in a cage."
—A young Jodie, describing Aiden's presence

Aiden (pronounced "Eye-Den") (born and died on May 10, 1990) is the secondary playable character, and the invisible protagonist of Beyond: Two Souls. Along with Jodie, as protagonists, they form and refer to the title of the game. He was the son of Jonathan Nichols and Norah Gray, and the twin brother of Jodie Holmes, he died during childbirth, strangled by the umbilical cord. However, his spirit remains tethered to Jodie which allows him to communicate with her at all times.

Levitation: Aiden can float and hover at any height, but can only travel a certain distance from Jodie.

Intangibility: Aiden can phase through any solid surface. However, he cannot travel through entity-proof doorways, as seen in "Dragon's Hideout."

Telekinesis: With enough concentration, Aiden can deliver powerful psychokinetic thrusts that can move or damage physical objects and harm other spiritual entities. He can also perform a Vaderian "force choke" to strangle enemies.

Possession: Aiden can take over the minds of any nearby humans, allowing him to more directly interact with the physical world. Possessed individuals usually have rolled-back eyes and are incapable of speech, and physical contact with another human causes Aiden to be ejected from their bodies. When possessing an enemy, he usually has them commit suicide once their services are no longer needed.

Clairvoyance: Aiden can direct mnemonic imprints from certain objects to Jodie, which she experiences through visions. She in turn can see the world from his point of view, allowing him to warn her of threats or enemies that she cannot physically see.

Healing: Aiden can heal others by greatly speeding up their healing process and relieving their pain. It is possible that this ability can relieve afflictions such as withdrawal from drugs.

Force field: Aiden is capable of creating a protective field that can shield Jodie and others near her from harm like bullets and fire. His force fields can also allow Jodie to remain unharmed after falling from potentially lethal heights.

Pyrokinesis: Aiden is also shown to have a certain control over fire, such as turning down the flames in a burning building to allow Jodie to escape, and lighting a campfire in Dragon's Hideout. 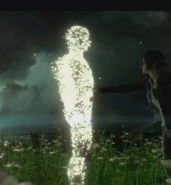